With just eight minutes left in the second overtime period, Sanaa Hebron ’22 took the ball down the field and scored on a drive past the goalie, notching a 2-1 win for the Cougars. It was a well-played game as the number one ranked George School varsity field hockey team hosted the number four ranked Moorestown Friends School team for the Friends Schools League (FSL) semi-final game at Cougar Field on Tuesday, October 30, 2018.

“We knew it wasn’t going to be an easy game as we lost to MFS in the regular season 1-0,” said Coach Nancy Bernardini. “To win, we needed to step up our play and continue to fight for possession of the ball with every ounce of strength that we had.”

Five minutes into the first half, MFS scored the first goal. But the Cougars never flinched and got right back into the game. Three minutes later, GS scored with a beautiful goal by Annie Borovskiy ’20, assisted by both Izzy Robinson-Cloete ’20 and Sanaa.

“Our defense did a wonderful job of stopping the MFS attack. Goalkeeper Vanessa Baker ’19 made nine spectacular saves in the regulation game,” said Nancy. “Our offense did an excellent job of pushing the ball up the field and forcing corners.”

The game ended in a 1-1 tie and went into overtime. Overtime procedures call for a seven-on-seven game for two fifteen-minute periods, and the first team to score wins the game.

The teams battled it out during the first overtime period, but there was no goal. On to the second overtime period, the ball went back and forth, with both teams achieving several heart-stopping fast breaks. Vanessa made four incredible saves. It was a nail-biting finish to the end, when Sanaa scored for the Cougars.

“What a fantastic ending to the game,” said Nancy. “All credit goes to these fifteen players, a team that is small but mighty. A team with an overflow of heart and grit. A team that loves to play and loves to win. A team that never gives up!”

The FSL finals are scheduled for Thursday, November 1 at 3:15 p.m. on Cougar Field. The Cougars will play second ranked Academy of the New Church who defeated Shipley School in their semi-final match. 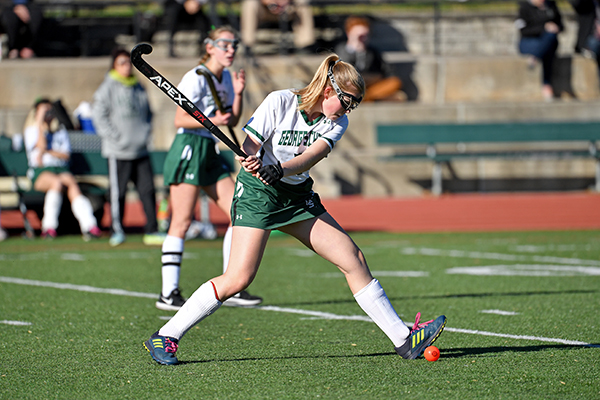 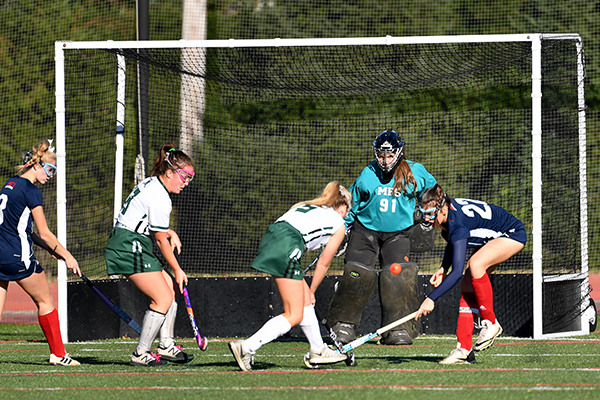 Emily Matson '20 and Izzy Robinson-Cloete '20 work persistently to put the ball in the goal. 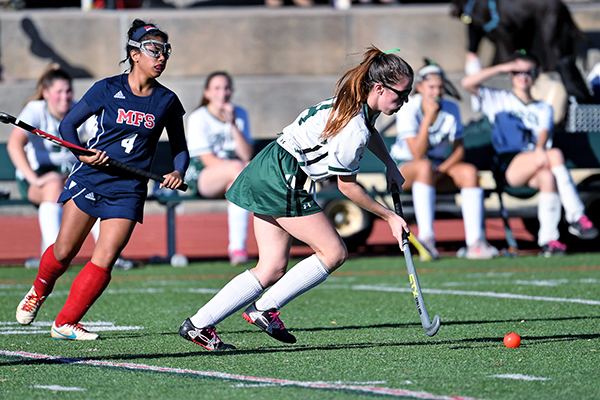 Left back Mallory Fritsch '19 dribbles the ball down the field, thwarting another MFS attack. 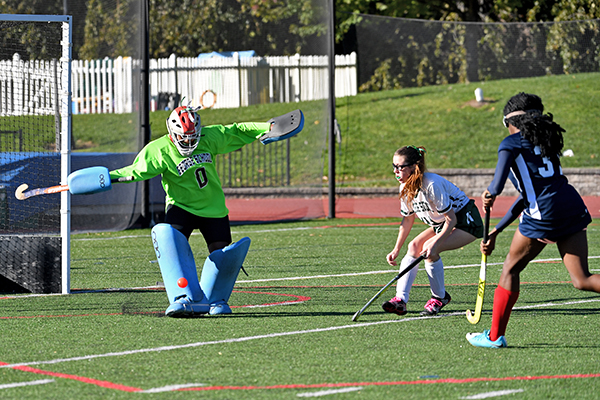 Tri-captain Vanessa Baker '19 makes one of her thirteen spectacular saves in the game. 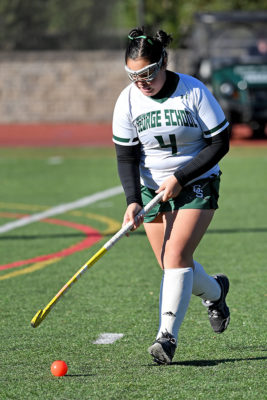 Tri-captain Camille Drury '19 wins the ball once again as she protects the circle. 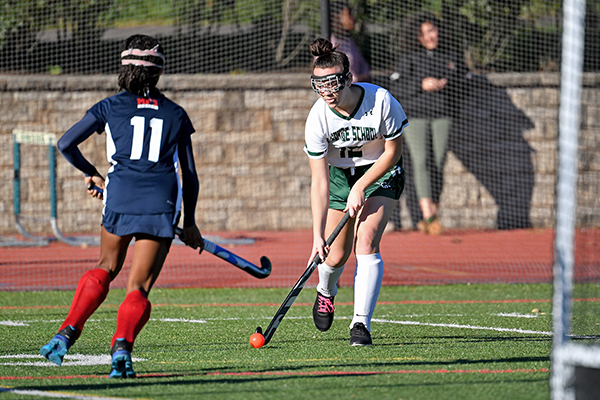 Middie Eva Kinnel '20 skillfully takes the ball into the circle to try to force a corner. 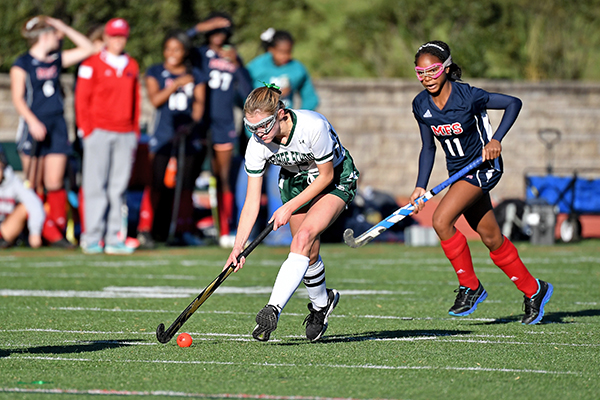 Tri-captain Lea Jensen '19 made another steal and dribbled the ball quickly down the field. 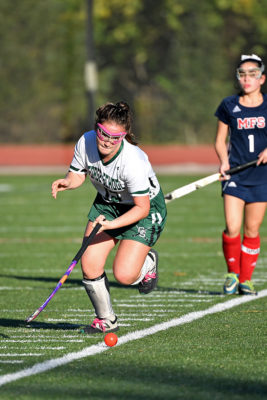 Izzy Robinson-Cloete '20 speeds down the field with the ball. Izzy had an assist in the game. 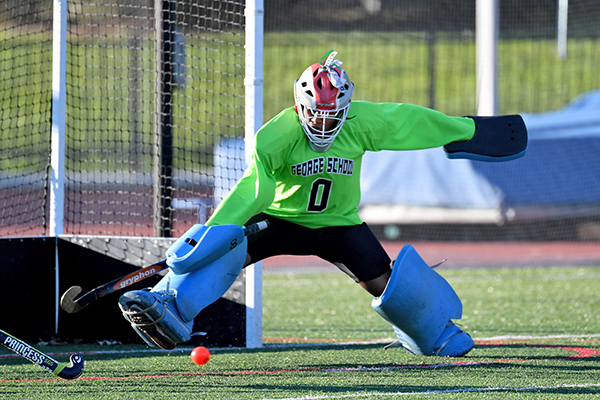 Another incredible save by Vanessa Baker '19! 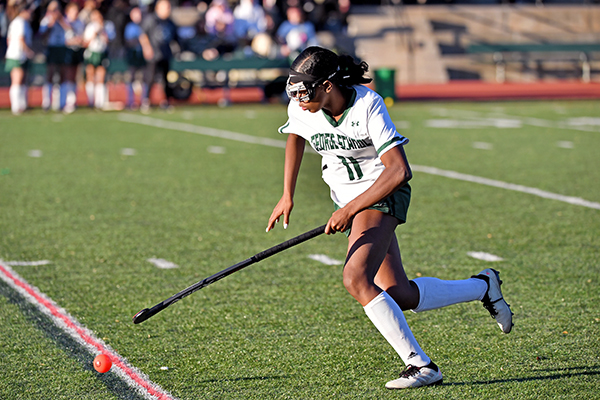 Sanaa Hebron '22 sprints down the field in a fastbreak. Sanaa scored the winning goal in double overtime! 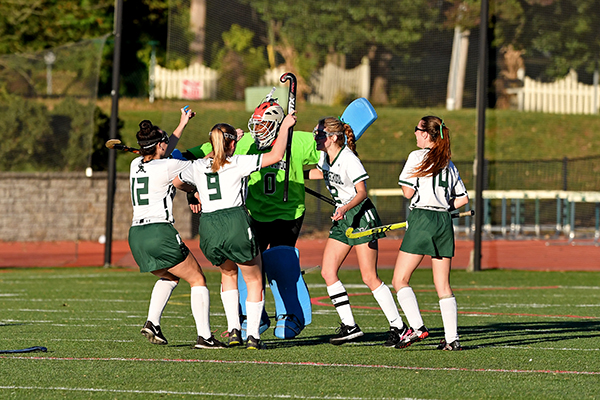 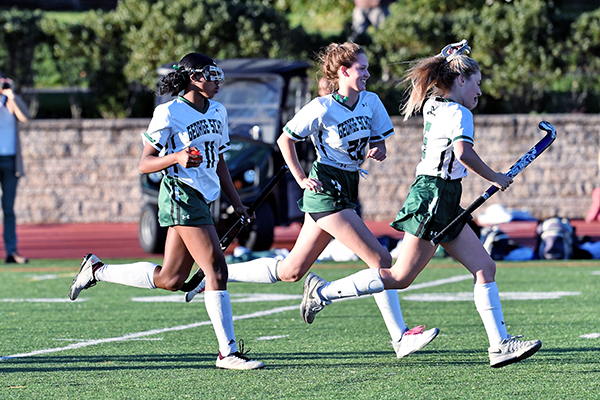 Sanaa Hebron '22 carries the ball back after the winning goal with teammates Kate Hunter '20 and Emily Matson '20. 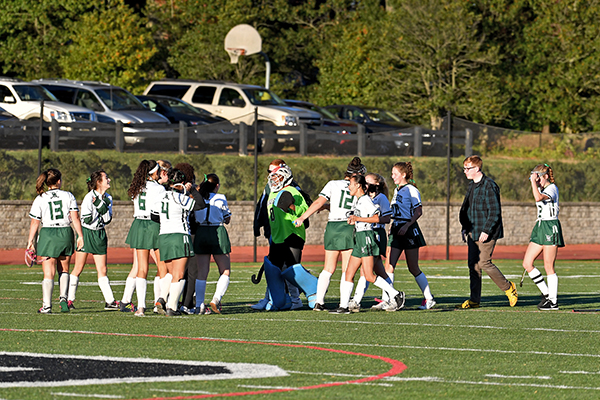