“The school has been brought through [a turbulent period] clearly and unapologetically, undeviating in its meaning and purpose to be a Quaker school.”

Eric Curtis is born in 1916 in London, England (the first head of school to be born abroad) and graduates from Oxford University in 1937. Following graduation, Eric remains at Oxford for two more years to earn an advanced degree in chemistry and the Oxford diploma of education. While there, he meets his future wife, Esther Gillett, and later becomes a convinced Quaker.

In 1948, Eric and his family move to the United States so that Eric can participate in a one-year exchange teaching position at Earlham College in Richmond, Indiana. Nineteen years later he is still on the faculty, as well as dean of students and vice-president of the college. 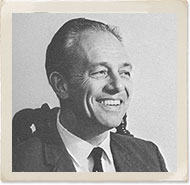 In 1967, Eric leaves Earlham for George School to replace retiring Head of School Richard McFeely. His connection with George School begins with his wife—Esther Curtis is the granddaughter of George School Committee chairman William Bancroft, one of the school’s most generous benefactors.

The first ten years of Eric’s tenure are defined by a constant challenge to authority, by both students and younger members of the faculty. The spirit of the late 1960s and the early 1970s make many feel comfortable strongly criticizing the traditions and routines of the George School community.

Despite the constant struggle to define new community practices for student and faculty-initiated criticisms, Eric Curtis enjoys a remarkably successful tenure as head of school. While many of his colleagues are being driven out of office, he brings George School through a trying economic climate with the help of large bequests and strengthened annual giving. Four major building projects are completed during his tenure—the Twelfth Street Meeting House of Philadelphia is rebuilt on campus, and the school adds the Spruance-Alden Science Center, the Worth Sports Center, and the Marshall-Platt Swimming Pool.

Through Eric’s leadership, George School took the most difficult, but in the end, the most rewarding path. Eric and the faculty listened to, and tried to learn from, the students. There were endless hours of dialogue while each tried to explain to the other what was of value to each. In the best Quaker tradition the school community—faculty and students—searched together for the truth. Compromises were made, consensus reached, changes undertaken. Some felt that the school had changed too much, others that it had not changed enough. Eric ultimately described George School as neither permissive nor traditional because it draws from what was best of the experimental and the traditional.