“At George School I first heard of, and participated in, organized efforts to help others, face to face.”

When Julian Bond ’57 arrives at George School in the fall of 1952, his classmates would never guess that he will become a civil rights giant. At the urging of teacher John Streetz, Julian, age twelve, becomes the first African-American who isn’t a Quaker or staff member’s child to attend the school. A 1961 graduate of Morehouse College, Julian goes on to be a founder of the Southern Poverty Law Center, chairman of the NAACP, and member of the Georgia House of Representatives and Georgia Senate. 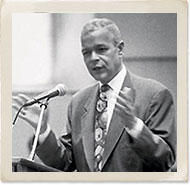 One of the original leaders of the Student Nonviolent Coordinating Committee, Julian helps bring media attention to the work of the organization in his role as spokesperson.

In 1965, Julian is elected to the Georgia House of Representatives following passage of the Voting Rights Act. He is the first president of the Southern Poverty Law Center and in 1968, his name is proposed as a vice presidential candidate—but at twenty-nine, he is too young to hold the office. In his later years Julian is a professor and poet, and he narrates several documentaries, including the PBS series Eyes on the Prize.

Julian returns to campus several times, twice to receive an Alumni Award and in 2011 to speak to students during assembly and visit classes. He credits George School with introducing him to non-violent social change.