“ I hope that the new biological insights will yield a better understanding of ourselves as human beings and of our relationship to our environment, so that we may become better stewards of a fragile Earth.”

Molecular geneticist Mario Capecchi ’56 is the second alumnus to receive a Nobel Prize, when he is awarded—along with Martin Evans and Oliver Smithies—the 2007 Nobel Prize in Physiology or Medicine for their discoveries of “principles for introducing specific gene modifications in mice by the use of embryonic stem cells.” 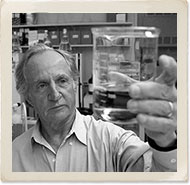 After a harrowing early childhood in war-torn Europe, the Italian-born Mario moves to Pennsylvania with his mother and attends George School. He receives a B.S. in chemistry and physics from Antioch College and pursues graduate studies with James Watson, co-discoverer of the structure of DNA, at Harvard, from which he earns his Ph.D. in biophysics. In 1973 he joins the faculty at the University of Utah.