“We cannot think only of academic subjects. Our concern at George School must genuinely be with the moral, social, and personal values of students.”

Born in 1904 in Marion, Indiana, Dick McFeely moves to Philadelphia with his family at age twelve. After West Philadelphia High School, where he is on the football, baseball, and track teams, he attends Swarthmore on an open scholarship. It is the beginning of his involvement with Quakers (he is the first head of school to spend his formative years in another religion). He is president of his class, captain of the lacrosse team, and a football star, and he works summers as a Pullman conductor.

In his senior year, Dick contracts poliomyelitis (polio). He spends time at a rehabilitation center in Warm Springs, Georgia, where he learns to walk with the aid of crutches and braces. While in Georgia, he meets Nancy Watson, a physical therapist from Tennessee who becomes his wife a few years later. After finishing his rehabilitation therapy in 1929, Dick returns to Swarthmore as assistant dean and joins the George School faculty two years later. 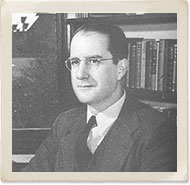 Standing well over six feet, with an athlete’s physique, a booming voice, and an exuberant personality, Dick stands out at George School. Students quickly come to appreciate the joie de vivre that coexists with his physical handicap. As part of a quiet effort to make faculty-student relations less formal, McFeely is the first teacher to ask to be called by his first name, and in his thirty-two years at the school (fourteen as teacher and director of studies, eighteen as head of school), he is known as “Mr. Dick” to students.

Dick becomes an even larger personality following the presidential election of 1932, when the campus learns that the popular teacher is a friend of President-Elect Franklin D. Roosevelt, who was also stricken by polio as an adult. The two had met in Georgia, as they underwent rehabilitation therapy and learned to live with non-functioning legs. Roosevelt even loaned McFeely fifty dollars as working capital for a gift shop in Warm Springs, which quickly became profitable and helped him defray the costs of his therapy.

In 1933 Dick and wife Nancy join the Society of Friends. Six years later, the George School Committee promotes him to director of studies—his first experience in educational administration—and he assumes full responsibility for the school’s academic program. He excels at it. In 1945, Friends Central School offers him its headship, and his time there is marked by progress in racial integration, a new affiliation with a school in Italy, establishment of a student government, and nearly 300 speeches.

Only three years after Dick leaves left George School, George Walton retires after thirty-six years as head of school. Chosen as George’s replacement in part because he knows George School well and has the confidence of the faculty, Dick returns as head in 1948.

As the country undergoes a period of economic growth, the school prospers. It builds four new buildings—Hallowell Arts Center, Walton Auditorium, the Alumni Gym, and McFeely Library—during Dick’s term as head. As independent education comes within reach of a larger segment of the population, coeducational boarding schools become increasingly popular. The few well-established coed boarding schools, including George School, run long waiting lists for admission. In the words of historian Kingdon Swayne, “it was an upbeat era, and George School had found an upbeat head of school to match it.”

Throughout his tenure as head of school, Dick is a popular speaker for a wide range of audiences, espousing a distinctly Christian message. He is committed to the importance of religion as a source of ordering principles in human life, and many of his speeches emphasize the importance of applying Christian principles to personal life and national and international affairs, especially in the post-World War II world. He preaches fearlessly against mindless anticommunism in the McCarthy era. Like his predecessor, Dick keeps extensive notes from his speeches, which provide a glimpse of the central ideas and beliefs behind his own personal philosophy.

As McFeely enters his sixties and the enormous burden of his physical handicap begin to take its toll, he develops what would be his final illness. After observing the worsening situation for several months, the George School Committee concludes in June of 1965 that he ought to retire, “for his health does not permit the same vital leadership that he formerly gave the school.” Dick and the committee agree on a plan for one more year as head of school followed by five years of sabbatical at full pay and continuing support to age sixty-five. His public response to the decision is positive: “things will works out for the best…dedication to George School will continue undiminished.” He steps down at the end of the school year in 1966 and dies that October.

The campus library, named for Dick and opened during his final year on campus, becomes home to a portrait of the head of school in May of 1983. At its unveiling, colleague Adelbert Mason describes:

A young boy was visiting a European cathedral, and was awestruck by the depictions of saints in the stained glass windows. When asked if he knew what a saint was, he replied, “A saint is a man who lets the light shine through him.”

That was the greatness of Dick McFeely. The light shown through him every day. His awkward, becrutched hike up the ramp to his office each day must have been fatiguing, but he reached the top with a warm smile and an air of optimism and reassurance that this day promised something better than yesterday.

McFeely is remembered most for his exuberant personality. His joy of life, his optimism, his humor, his devotion to family, his love of sports, and above all, the warmth of his spirit, define his time at George School and leave a lasting impression on those who know, work with, and learn from him.