Theater Arts: Design & Production students incorporated newly acquired technology into the staging of George School’s production of The Laramie Project by Moises Kaufman. The play looks at the brutal attack and death of Matthew Shepard, a gay college student, in Laramie, Wyoming in October 1998.

Focusing on the actual interviews of townspeople, news coverage, and journal entries, the play was staged using techniques to heighten audience awareness of the play by eliminating the distinction between the audience and the actors. It incorporated both photography and live camera feeds to highlight the words of the actors, underscoring the importance of the individual messages. The design used the theater’s new intelligent lighting system that allows the crew to spotlight the actors as they moved through the audience.

“Because this play is largely about perspective and viewpoints, we attempted to bring the action as close to the audience as possible so that they may include themselves in the storytelling on some level. Unlike true environmental theater, which prompts the audience members to move in and among the play’s action, some performers are amid the audience in the opening and then move to the stage. This was a practical solution given the limitations of our space,” explained Mo West, head of the Arts Department and Theater teacher.

“To make this more effective, designer Scott Crandall and his wonderful students embraced the addition of new lighting equipment that allows the instruments to move and highlight areas of the auditorium that have not historically been possible,” Mo continued. “This has been a brave and challenging process for them and they are accomplishing it beautifully.”

“After Matthew’s death, the media presence in the small town was overwhelming and we want the audience to feel what it was like for the residents,” said Sidney Gibson ’20, stage manager. “We designed the set around live camera feeds and photos displayed in multiple positions and programmed our new intelligent lights to follow the actors as they film the performance and move from the audience seating to the stage.”

“Two of the actors use actual cameras to film interviews with other actors seated in the audience during the play,” added Matisse VanGeem ’19, part of the sound and video team. “These camera feeds and other photographs were projected on the backdrop on stage, fading off and on at certain points during the play and enhancing the feeling of the ‘media’ as a force in the town.”

Theater Arts: Design & Production students replaced multiple conventional non-moving lights with Chauvet intelligent lights for the production. With design and programming they can swiftly alter the environment of the performance and help support changes of mood and effects.

Sean Kelly ’19, part of the lighting team, enjoyed the opportunity to work with the new lighting system. “You can control the color and patterns of the lights, add a strobe, and move the lights in all directions,” he explained. “You can program the lights to run without an operator to spotlight actors in the audience as they perform.”

Raven Zhan ’20 is a new member of the class who came to George School from China with a dream to build a career in theater design and production. “Working with the film and lighting for the play has been so interesting,” she said. “I also found creating the flats for the backdrop to be a challenging assignment. We worked with a number of paint and samples before we discovered a blue tint for the wood that worked well with the film projection.” The back drop is designed with a collection of flats painted to look like barn walls. The main flat has a textured wood face that shows 3D shadows.

“I think the nature of the play alongside of the directors’ concept offered us a ripe opportunity to acquire and experiment with new technological systems and ideas,” said Scott Crandall, Theater Arts: Design & Production teacher. “Technology cannot nor should not dictate our art, but there are times when it can enhance it.”

The Laramie Project was performed in Walton Auditorium on February 23 and 24, 2018. Both shows were free and open to the public. 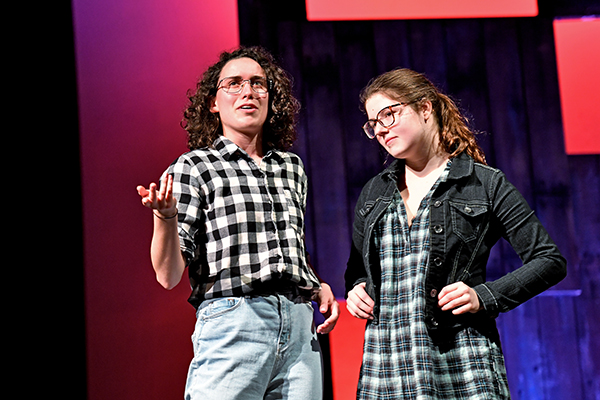 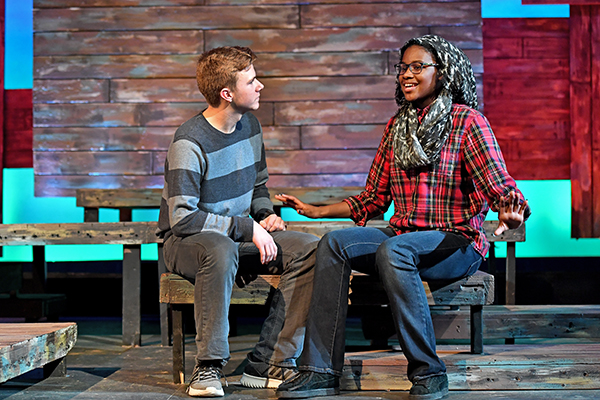 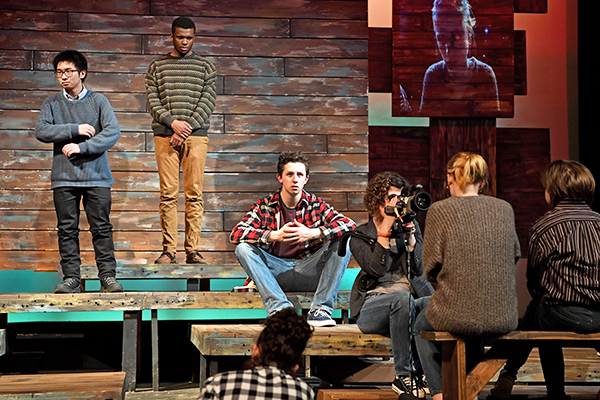 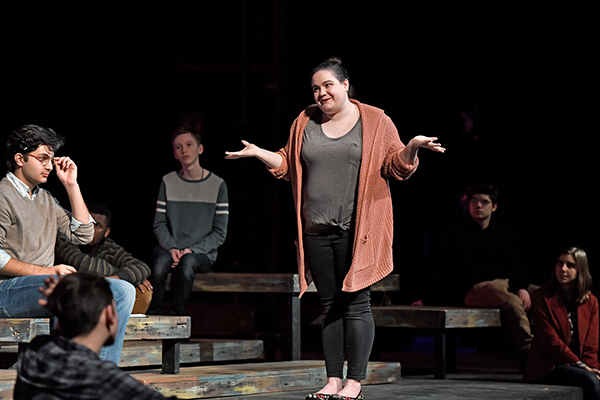 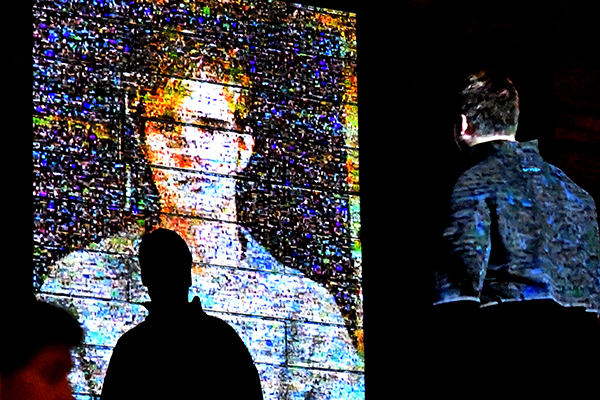 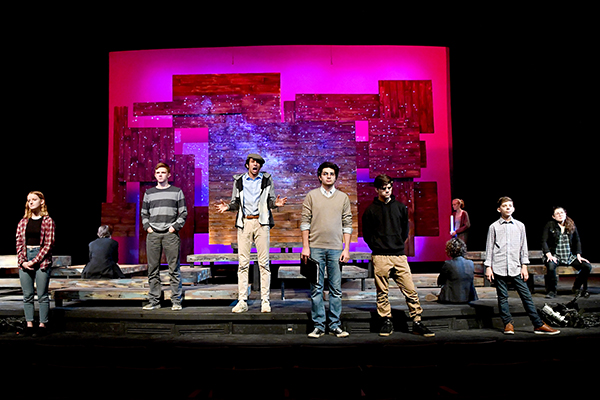 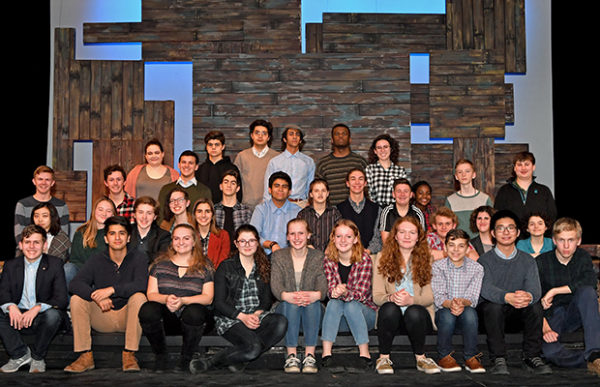 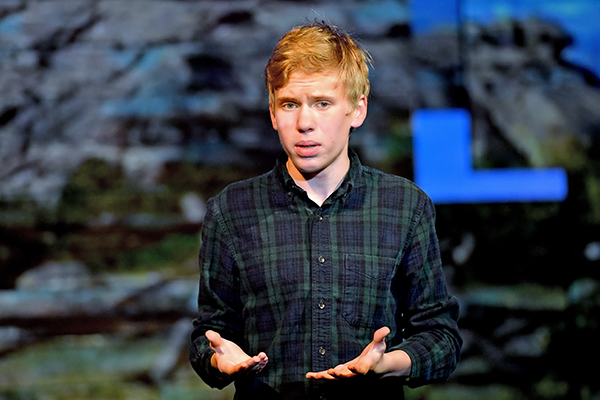 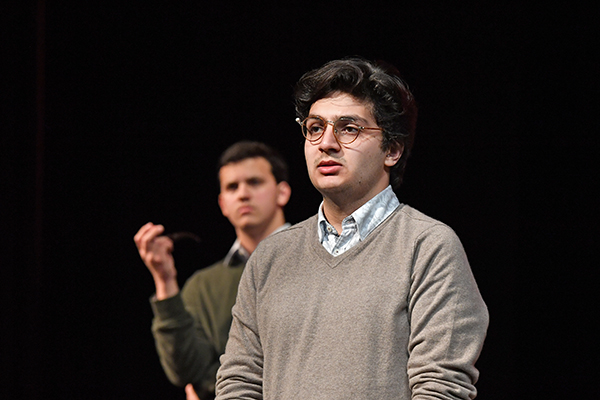 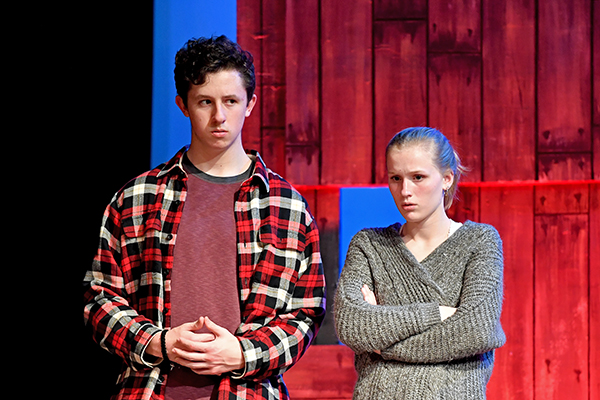 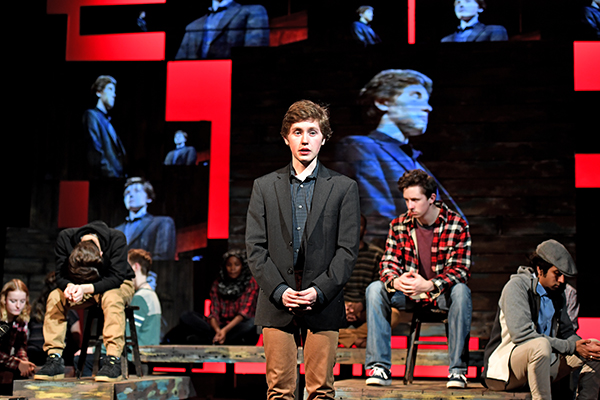 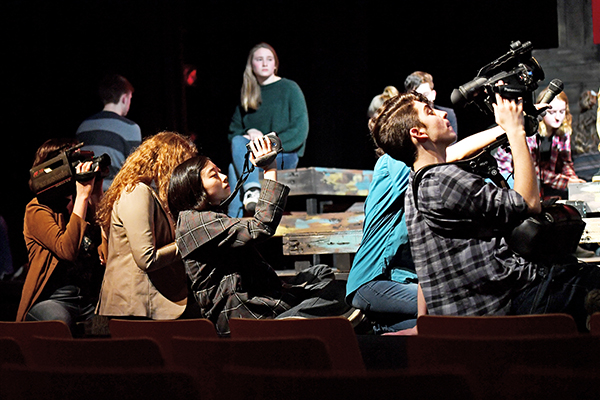 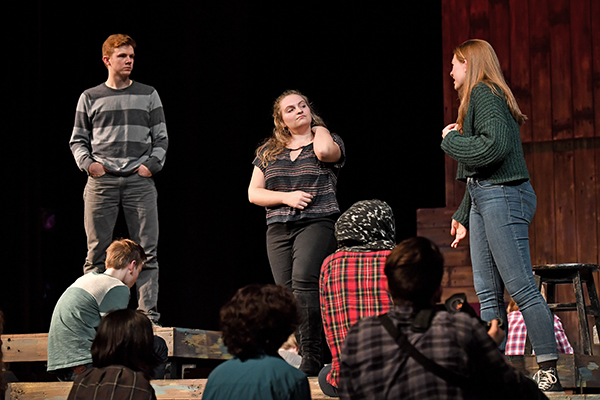 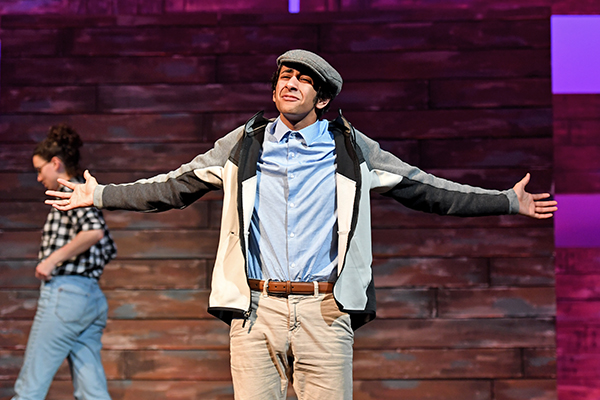 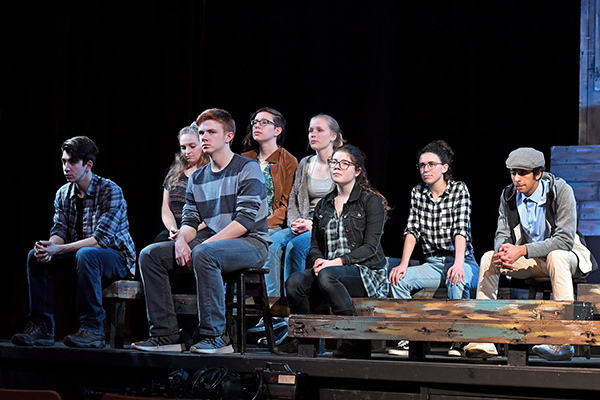