Susan Trickle Holland ’56 and Werner Muller ’56 met their senior year at George School and started dating. Two years later they were engaged to be married at the ages of 20 and 19 respectively; however, Susan decided to call things off two weeks before their wedding. The couple never saw each other nor communicated again for sixty years and never returned for class reunions. It was only after the passing of Werner’s wife in 2017 that the couple were reunited in 2018, almost sixty years to the day when they originally planned to marry.

Why did you decide to attend George School?

Susan: I entered George School as a boarding student my senior year. My senior year at public school was interrupted by a major surgery and happily George School permitted me to repeat the year there, allowing me to graduate from George School like my father did in 1930.

Werner: I entered George School as a freshman day student. There were several of us in the Class of 1956 from Bryn Gweled Homesteads in Southampton who commuted—Mario Capecchi ’56, Martha Jonet (Marty Jo) Paxson Grundy ’56, William (Bill) Dockhorn ’56, Jessica Newton ’56, and me.

Susan: The swim team was hugely important to me. I became a swimmer as a very young toddler as part of my polio rehabilitation program. I had a whole childhood of competitive swimming out of that physical therapy, which turned out to be an asset to the girls’ swim team during a championship year. The Hallowell Art Building was a center of real energy for me; energy that would sustain me for the rest of my life as a person immersed in the arts. I loved drama, set designing, studying pottery with Mr. LaFean, and studying Art History and drawing skills with Mrs. Pleasantdon.

The pertinent favorite memory was the day Werner popped up in the ‘milk window’ where my Shift responsibility was to pour refills of milk and cream into empty pitchers as students brought them. Here was this tall smiley guy leaning over to peer under the window with white teeth, soft dark eyes, and such a truly friendly expression on his face. “Would I go with him to the Saturday evening dance?” he asked. That was the beginning of everything. Werner sang in many groups and the Music Room was directly below my dorm room, on the third floor of Central Main. There was a utility pipe in the music room corner that came through the wood floor, right up to the corner of my dorm room and we developed a secret code to tap messages on that pipe.

Werner: My most memorable and favorite moments at George School and the year with Susan were: music (including special chorus, regular chorus, plus a small quintet with Charles Bayard King ’56, Andrew Nighswander ’56, Barry Cole ’56, and Michael Kosoff ’56); throwing pots in the ceramics studio with Susan; acting in the show ‘RUR’ with Susan on set design; captain of the soccer team; competing in the hurdles and high jump in track; Day Student Council; working on class committees, and assisting with Junior/Senior Weekend and the Class of 1956’s Commencement. 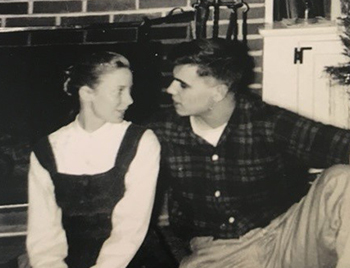 Susan, I believe you and Werner were engaged to be married but just before the wedding you called things off. That must have been extremely difficult. Can you share why you felt this was the best thing to do?

Susan: Werner and I dated for three years, becoming engaged to be married during his second year at Haverford College and my second year at Temple University’s Tyler School of Fine Arts. I remember the Friends’ practice of preparing for marriage very well. My overseer met with me in Wallingford where I attended Providence Friends Meeting. And then we met together in Bryn Gweled with Werner’s overseer who looked me straight in the eyes and said, “An engagement is just that…a time when you can learn all you can about your prospective spouse. MARRIAGE is forever. When you vow to marry someone, it is permanent. You are saying that you are ready to spend a lifetime with that person, good times and hard times.” It was that comment that made me realize that I was not sure I could keep a vow like that. As we looked at places to live, we found one on the Haverford campus without a kitchen. Wash dishes in a bathtub? Cook on a hotplate? Wash clothes (possibly even diapers) in the bathtub? Could I do that with a happy heart, day after day, while the determined Werner went to medical school? I realized that I did not trust that I could. I was not ready. It was such a sad thing and I never saw Werner after that.

Werner: Susan had become a member of my immediate family during the two years following our graduation. Susan’s leaving changed my life, emotionally and academically. I returned to Haverford to complete my degree the Fall of my junior year and music (the glee club, double octet) and athletics (captain of the soccer team) kept me on my feet. I always respected the honesty and courage that it took Sue to decide not to marry and leave me so abruptly within two weeks of our wedding. We did love each other.

Can you tell me what path your life took after the breakup? Did you have any contact or see each other at reunions?

Susan: My path was errant and confused after that. My connection to the Arts community and the “real world” led me to a lot of decisions that were not good ones. I married and had three lovely children—it was a difficult marriage and ended after twenty-one years. There was a second marriage that ended in divorce. I thought by then, I should not try to be a wife at all.

We both avoided reunions at George School; neither Werner nor I were inclined to run into each other. There was so much bittersweet history there. It seemed unwise to both of us to connect with each other. My life grew very centered around my children, their children, and art. And his life centered around his family.

Werner: After completing my Chemistry degree, as a premed student, I worked for two years in cancer research before being drafted. With the blessing of the American Friends Service and Bucks County Draft Board, I served for two years doing Community Development in the newly independent country of Tanganyika in East Africa, with a group of twelve young people including Garry Thomas ’57. This changed my life forever and my future wife, Helen Tyson, was one of three female volunteers in the program. After one year of reentry into the United States, Helen and I married in 1964. In 1970, with graduate degrees from Columbia University, Helen and I, with two baby girls, moved to Las Vegas, New Mexico. Our son, Carlos, was born in 1971. We homesteaded and taught at New Mexico Highlands University, Helen in Swahili, and I in Science Education. We raised our children on a small ranch investing time and energy in farming, ranching and 4-H projects. Sadly, in 2017, Helen’s ten-year battle with Dementia and Alzheimer’s Disease was over, after fifty-three years of marriage.

I never returned for a George School reunion until the 60th celebration when Elizabeth (Betsy) Worth Pressnall ’56 shared with me the status and whereabouts of Susan Trickle (known then as Susan G. Holland, American Artist). However, I always checked Class Notes during milestone reunions searching for news about Susan Trickle.

How and when did you get reacquainted?

Werner: In June of 2018, I felt strongly that I wanted to contact Susan to bring closure to our relationship as I approached the end of my life. After a Google search, I found a website of her paintings and published writings and decided to write a note on her blog. There was no response. A month later I sent the same note to an address on the website with a picture of a New Mexico sunset. It was returned. One month later, in desperation I Googled her again and found she had published a little piece about an old flame; I knew she had seen my attempt to start a conversation. Four months after my first effort to make contact, I got an email from Susan.

Dear Werner,
“I thought I would take a chance. You know when you throw a pot on a wheel, sometimes it collapses, and you have to wedge, pound, and knead the clay and realign the molecules…”

My heart sank and hope rekindled. We decided to realign our molecules. First there were emails once every two-three days. After one month we decided to talk to each other on the phone … once every two days, then once every day, twice a day, three times a day. After two months, I visited Susan in Bellevue, Washington, where she had been living with her daughter, a month later she came to visit me in New Mexico.

Susan: I write a lot on the Internet and Werner found me on one of my blog sites. I had written about Werner finding me again. Months after I had written it, I looked back and saw he had commented on my blog! I was stunned. Really. After the surprise wore off a little, I decided to do a search on the Internet. Why was he writing to me after all this time? I came upon his name as it appeared in the obituary of his wife, Helen. Should I respond? Yes, I should. It was Werner, after all these years. Emails ensued, then phone calls. Long phone calls. Finally, we met face to face over a period of several visits, first a visit to Seattle where I lived with my eldest daughter and then me to New Mexico’s northeast corner, to Werner’s homestead. We now have been living in partnership for the past two years at this, the end of our lives.

Tell me about your relationship now? Does it feel the same or different from the first time you dated?

Werner: Susie and I feel that this entire experience is not a fairy tale but a mystery. We have decided to “just be,” and take the memories of our dancing, our music, our theater, our time together in the 50s and rekindle the spirit of “us.” We have rehashed and relived details of our entire lives before George School, the three years that was leading us to a traditional marriage, and the sixty years after. We are comfortable together.

What do you love most about each other?

Susan: There are so many things I love about Werner, but the most important is the same thing I loved when I first met him at George School. What I loved and still love the most about Werner is his sense of Truth. He is open and straightforward—nothing fake about him. He was like that when he first poked his head into the milk window at George School, and after a six-decade absence from my life, he is still like that now. Werner tells the truth and plays by the rules of human fairness. He loves a clear conscience.

Werner: What I love about Susan, now at 83-84 years, is the same untamed creative mind and spirit from 1958 that challenges her and me every day; her love of life, love of all living things, her “can-do spirit,” her curiosity about everything, her determination to get it right, her command of visual arts, her writing, fascination and mastery of language, athleticism, her empathy and love of children, her forgiveness of herself and others, her sense of humor, and her appreciation of music.

The days for both of us fly by, but the time is short; and the uncertainty is overwhelming. The molecules are realigned. Our partnership today is different, non-traditional, and our love is unconditional and unscripted, which is so comforting. Love sustains us.