Origin of the Cougar Crazies 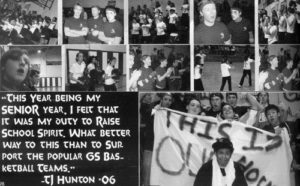 The Cougar Crazies, a group of enthusiastic—some might say rabid—George School sports fans, first took to the stands of Alumni Gym in 2005-06. And stand they did—often for entire basketball games. They painted their faces. They held banners. They screamed personalized chants for different plays and players. They led the packed gym in the George School hymn during tense moments.

“With firm conviction that athletics builds community, Liam Scully-Wolfe ’06, TJ Hunton ’06, and I embarked on supporting the basketball team by rallying the community behind them,” said Andrew Biros ’06. “The term ‘Cougar Crazies’ is a spinoff of Duke University’s fans who make their stadium one of the fiercest environments in college basketball.”

It surprised Andrew that the craziness spread so quickly. “That year was the most packed I have ever seen Alumni Gym for games,” he said. “As Crazies, we had specific chants for individual players and for part of the game like free throws and tip offs. During tense moments, like when there were two minutes left in the fourth quarter, I would pass out copies of the George School hymn during a timeout and lead the entire community in song to rally the boys.”

Once the community experienced the positive energy of boys’ basketball, fans and friends began cheering on other teams with similar rowdiness. To this day, it’s not unusual for the sidelines of George School games to be transformed by a Cougar Crazy spirit that sometimes borders on insanity.