My theme of “mythology” evolved from my interest in Mexican art, which I have been exposed to throughout my life. Specific symbols in this body of work include images of hummingbirds and marigolds which are two important symbols in Mexican culture.

The reason I chose to have a focus on these symbols is because personally they represent a longing for the mystical, for meaning beyond what we see. Hummingbirds take on roles of messengers from the Gods to the rest of the world, and the marigolds serve as beacons to guide lost spirits back home. This culture of the uplifting of the normal has resulted in many of the other images depicted on my work. Many of the figures scratched into or glazed on my pieces are inspired by the people around me.

A myth, simply put, is a story that reveals one’s origin or history. They typically carry deep meaning and reflection. My influences include artists such as the potter Beth Lo and muralist Diego Rivera, who both use their work to depict their interpretations of society and culture, especially in times of conflict or change.

For Beth Lo, cultural assimilation is no stranger. She is a Chinese American potter, who’s works juxtapose the cultures she associates with. Although Rivera did not juxtapose two cultures from around the world, he used his work to starkly unify Mexico’s past and present. These two artists immortalized their experiences by creating art that can be shared with others. Much like the stories passed down through generations in my culture, Lo’s and Rivera’s art become part of a cycle of spreading hope and magic.

My exhibition is composed of functional hand-built, stoneware pieces. My hope for this show is to pay homage to those before me by building and decorating the pieces in traditional ways. Pre-Hispanic Mexican pottery was made using slab or coiling techniques- both of which I used for the pieces in this show. Hand-built pottery is built piece by piece, and layer by layer.

Once the pieces were bisque fired, I got to further develop my glazing skills by practicing sgraffito, or the process of scratching pieces to reveal a different color underneath. I eventually got familiar with this technique and looked for different ways I can add to it. While creating Mi mama me dijo, I added an extra step into the decorating process by filling my carvings with porcelain slip. Each of my plates is decorated using different glazing styles.

Itzcuintli is a wood-fired slab plate that I used acrylic paint to decorate. Farmer and Cempasuchil are electric fired slab plates decorated with underglaze. Cempasuchil in particular was decorated a little differently, as it is decorated using a decal painted orange. Roberto was made by scratching a linoleum tile and using it as mold. American Parents were also created using slabs that were shaped and eventually glazed with underglaze. The vase with a slanted bottom, Chosen, was coiled and sgraffitoed. The pitcher and cup set took the longest to make because I made the pitcher by pinching a bowl and adding coils to it. The cups were coiled and carved.

This show is meant to interact and engage my audience, as it is displayed in a case that can be viewed on two sides. This makes it so that my audience can view the drawings embellished all around my pieces from different positions. Whether viewers relate to the figures presented, or the themes of nature and man, I hope that my pieces capture and maintain the attention of my audience and potentially push them to ask questions or even make up their own narrative explaining my imagery. 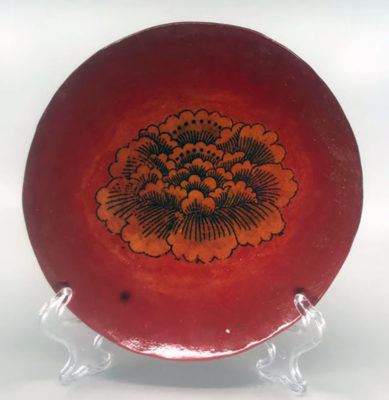 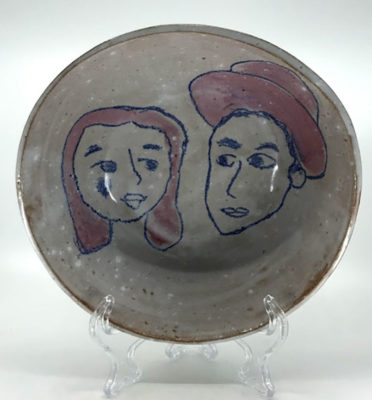 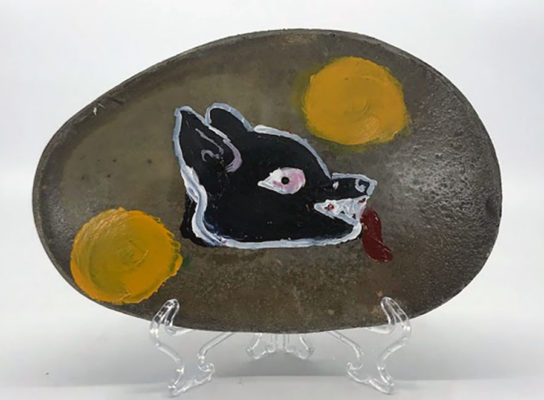 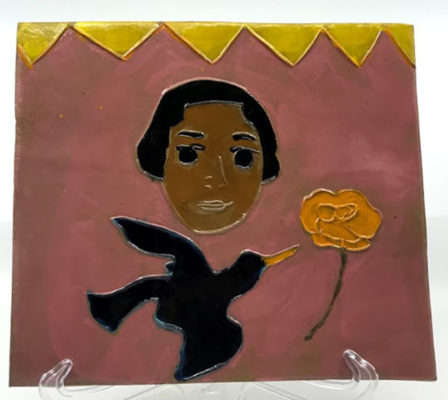 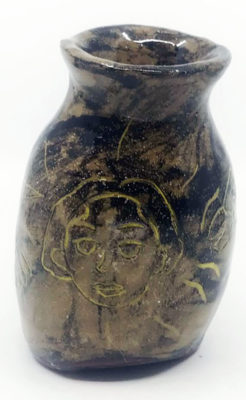 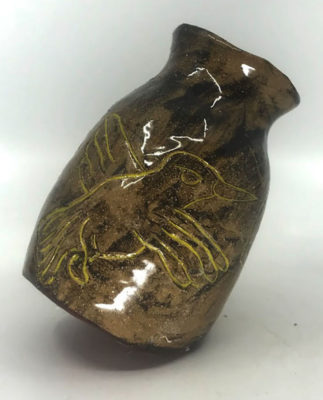 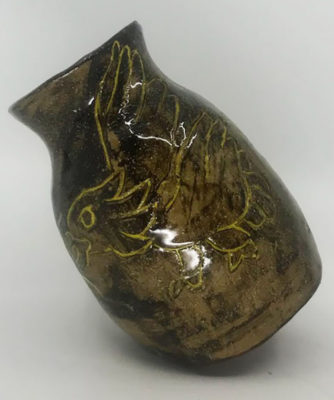 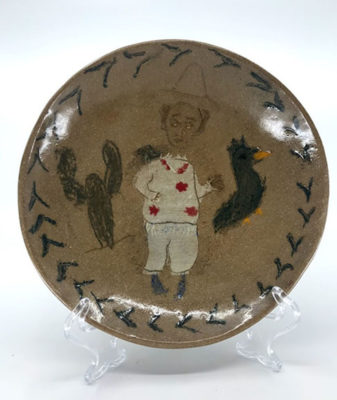 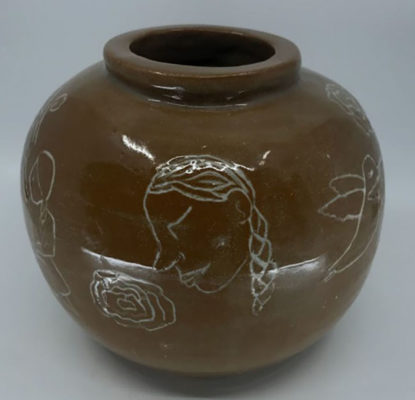 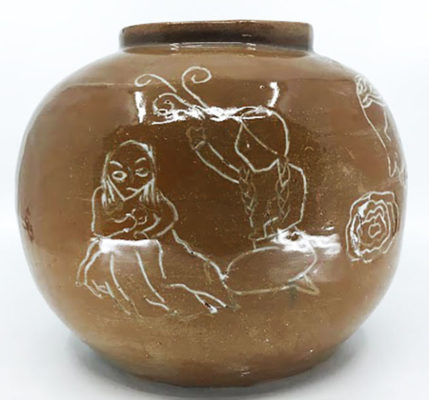 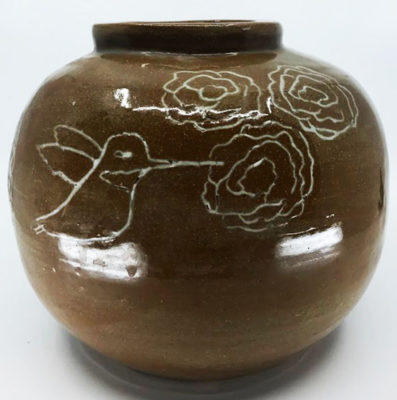 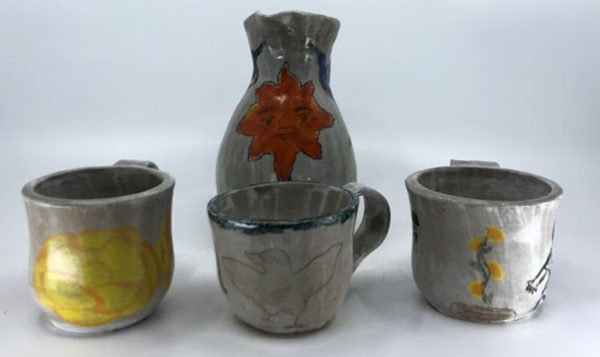 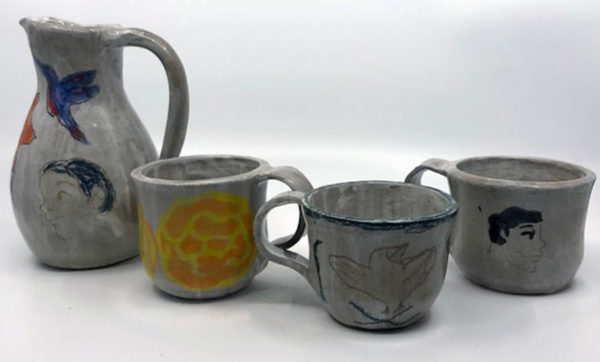 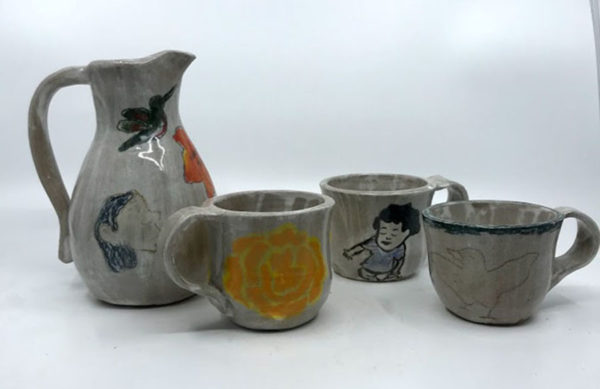