“George School students care for one another and live on this land in a way that says not, ‘This land belongs to me,’ but ‘I belong to this land along with everyone else, and I want to learn about how to share it.’”

David L. Bourns grows up in Mansfield, Ohio, where he is a member of the Presbyterian Church and president of his high school student council. He attends the College of Wooster, majoring in economics. Following graduation, he turns down a graduate fellowship in the School of Business at the University of Chicago, instead entering Union Theological Seminary in New York City for a master of divinity degree. His years at Union Theological Seminary introduced him to issues of poverty and race and he goes on to serve a number of organizations committed to making a difference in difficult urban settings.

Oakwood School, a Friends boarding school in Poughkeepsie, New York, hires David as assistant head in 1971. Here, as a member of the Poughkeepsie Friends Meeting, he forms his first formal affiliation with the Society of Friends. He succeeds to the headship at Oakwood in 1973, serving in that position for six years. In 1979, upon the retirement of Eric Curtis, David comes to George School, moving into Sunnybanke with his wife Ruth and their three children. 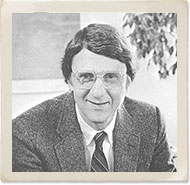 David begins to implement his personal leadership style as soon as he arrives. His convictions, based in Quaker practice and psychology, focus on the theory that people will be happiest with decisions if they have participated in the decision-making and feel some “ownership” in the agreed plan. In the early years of David’s tenure, the faculty, at his initiative, re-examine almost every aspect of the school.

The school develops numerous innovations during David’s tenure. Within the first decade, graduation requirements are strengthened and the International Baccalaureate program is initiated for the most talented students.

Perhaps the most remarkable triumph of David’s tenure is the realization of a high level of diversity in the student body. In the early 1990s, the student body’s racial makeup closely approximates that of the nation at large.

In the fall of 1991, the Bourns suffer a family tragedy: their oldest child, Andrew ’87, suffers a heart attack and dies at the age of twenty-three. Like his father, Andrew is committed to social justice, and Kingdon Swayne ’37 establishes the Andrew Bourns Social Justice Grant, which enables students to work on social justice in the inner cities in the United States, in Andrew’s honor.

Despite this tragedy, David continues to provide the school with leadership that leads it to flourish. Upon his retirement in 2000, students and faculty alike celebrate him as a skilled leader committed to diversity and community. Judy Bartella, ceramic teacher since 1967, tells a Georgian reporter, “One of the things that I think David has brought to George School is a strong sense of community, a sense of all the members belonging to one another and having responsibility for one another.”