“The enthusiasm of George Maris was infectious. He spoke so persuasively that parents of prospective students became less hesitant to send their children to a new boarding school.”

Head from 1893 to 1901, George Maris is born in 1842 in Chester County. He graduates from the University of Michigan at age twenty-five and returns home to work as a teacher, superintendent, and principal. He also completes the requirements for a master’s degree at Michigan and studies enough law to be admitted to the bar.

From 1881 to 1883 George serves as superintendent of the Friends schools under the care of Philadelphia Yearly Meeting (Hicksite), part-time work that he combines with a teaching appointment at Swarthmore College. Swarthmore calls on him to help with fundraising after the fire of 1881, a task that leads to his first meeting with John M. George and the latter’s subsequent bequest. 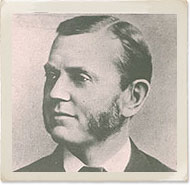 George Maris’s position as a Quaker educator makes him a natural choice for membership in the original George School Committee, formed in 1888. A subcommittee charged with selecting a head of school reports on December 10, 1892, that George Maris and Joseph Walton are “the most available” candidates, and the committee eventually choose George Maris.

George plays a crucial role in securing the school’s founding bequest from John M. George. As others labor to build Main building from April to October 1893, he alone shapes the school’s academic program. And though the typical independent school begins with only a handful of pupils, George Maris opens this one with 155.