“To educate and nurture young people to the highest standard we are able and to do so consistently with the Quaker values that are at the very soul of this school—not least rigor in the pursuit of knowledge, including self-knowledge.” 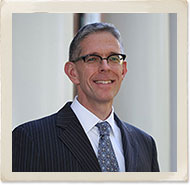 Sam also has served on the Board of Trustees of Wilson College, chaired the Board of Directors of the Millport Conservancy, Lititz, PA, and is a member of the Board at Pennsylvania College of Health Sciences, Pennsylvania Association of Independent Schools (PAIS), and Friends Council on Education.

“From the moment I first set foot on campus, George School impressed me as a family as much as a school. Building on the inspiring leadership of Nancy Starmer and continuing to strengthen this incredible educational community will be exhilarating responsibilities and a great pleasure. I am inspired by being a leader and advocate for George School and the values that make it distinctive.”