“I had such a wonderful, luminous education...My love of learning, my desire to remain curious and risk hanging out in the unknown began at George School.”

Bios of Meredith Monk ’60 describe her as a composer, singer, director, choreographer, filmmaker, and performer/creator, as well as an innovator of “extended vocal technique.” For Meredith, the voice is both the ultimate instrument and a universal, eloquent language in and of itself. Most of her compositions do not use text.

“When I started working with the voice as an instrument, there wasn’t anyone working that way,” explained Meredith. “It was lonely. Looking back, I’m glad that there was no precedent. I had to find my own way and find my own unique voice. I believe there’s only one of us in the universe. Our task is to fulfill our potential.” 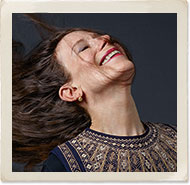 Meredith sees a connection between her creative process and two significant practices in her life: meditation (she is Buddhist) and meeting for worship. “I continually come back to a place of inner quiet as the source of my creativity and sense of well-being,” she wrote.  Her discipline of daily work allows inspiration to discover all that sound can be.

Meeting for worship was not her only George School influence, “I had such a wonderful, luminous education there,” she remembers. “I believe that my love of learning, my desire to remain curious, and risk hanging out in the unknown, no matter how uncomfortable that might be, began at George School.”

It would take pages to detail Meredith’s performance history and still more to list her accolades. Significant among them are singing at Carnegie Hall, for His Holiness the Dalai Lama. She also earned a MacArthur Fellowship (the so-called “Genius Grant,”), two Guggenheim Fellowships, three Obies, and the National Medal of Arts which she received from President Obama in September 2015.