“I love the theater as much as music, and the whole idea of getting across to an audience and making them laugh, making them cry—just making them feel—is paramount to me.”

Eight Tony awards, an equal number of Grammys, an Oscar, a Pulitzer Prize, a Kennedy Center Lifetime Achievement Award, and the 2015 Presidential Medal of Freedom. The list of honors garnered by musical theater legend Stephen Sondheim is almost as long as the list of works for which he has written the score and/or lyrics. These include, but are far from limited to, West Side Story, Gypsy, A Funny Thing Happened on the Way to the Forum, Company, Follies, A Little Night Music, Side by SIde by Sondheim, Into the Woods, and Sweeney Todd. 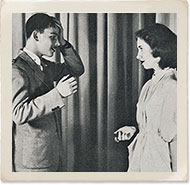 Add to these accolades the George School Alumni Award in 1996. As Head of School David Bourns says at the Alumni Day award presentation, “At the 1993 celebration at the Kennedy Center, it was said of Stephen Sondheim that it is now impossible to imagine the theater without the great American invention, the musical. It is equally impossible to imagine the musical without the contributions of Stephen Sondheim.”

Though Stephen’s professional star ascends in the 1950s, when he writes the lyrics for West Side Story, the overture to his illustrious career actually dates to his time at George School. Here he pens a comic musical, By George, which is well received by his fellow students. Oscar Hammerstein, whose son James is a friend and fellow GS student, is a mentor.