As one of our oldest living alumni, Don Sutton ’39 was delighted to share his memories of Commencement at George School. Don grew up on campus as he is the son of Stan Sutton, former Director of Athletics and Physical Education for Boys, Master of Drayton Hall, and well known as an outstanding wrestling coach.

Commencement was just as magical in 1939.

The Georgian noted, “Commencement morning dawned bright and cool—the finest day in many years for the beautiful outdoor service which marks the end of their George School days for each successive class. 108 seniors, 30 of them children of former students…received their diplomas from Mr. Walton.”

Looking at the list of graduating seniors, we see that students came from across the United States, including Massachusetts, Connecticut, New York, Delaware, Maryland, Virginia, Ohio, Illinois, and Wisconsin, in addition to Pennsylvania and New Jersey. George School was always international, and seniors also came from Turkey, China, and Barbados. 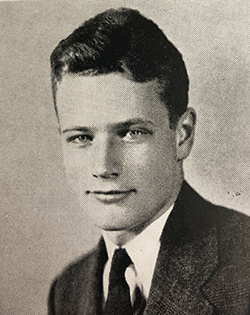 “I remember standing in Main with my classmates thinking how smart we looked in our white blazers and the girls looked lovely in their white dresses,” said Don. “We walked towards the William Penn Outdoor Auditorium* in a long train, following our Class Sponsor, Miss Francis W. Saurman ’21, and Head of School, Mr. George A. Walton. I walked with Wally Murfit ’39 from Newtown. It was fun waving at faculty and friends who had gathered along the side of the path. It is hard to remember the exact details of Commencement as it was 82 years ago, but I believe we had speakers from outside George School. I do recall feeling nervous walking across the stage to accept my diploma. Afterwards, there was a reception on South Lawn with plenty of sticky buns. It felt bittersweet to say goodbye to my classmates and friends. I was excited to go to college and start a new adventure, but I knew it would be hard to keep in touch. This was before Facebook, email, and all the great ways available now to stay connected.”

After George School, Don attended Ithaca College and fought in World War II, serving in Italy. After completing graduate work, he enjoyed a long career in education. Don spent 27 years at Roanoke College in Virginia, where he served in several top administrative roles, first as the Director of Student Activities, then Dean of Men, Dean of Students, and Director of Student Aid, before moving into Alumni Relations and Development. During his tenure he oversaw significant growth in enrollment and development of the campus. Each summer, Don ran a summer camp, Camp Wallawhatoola, which was founded and previously operated by his father.

Don reflected, “George School is unique and gets more so as time passes. It was a wonderful place to grow up. The teachers taught me so much. I particularly enjoyed woodworking with Palmer Sharpless and building a canoe. I liked my co-op job working on the school farm, and of course sports—I was a three-season athlete playing football in the fall, wrestling in the winter, and track in the spring where my talent lay in shot put. For me, George School was about good friends, sports, and being a faculty brat.”

*The tradition of holding Commencement in the William Penn Outdoor Auditorium (weather permitting) continues to this day. The ceremonial entrance to the auditorium celebrates George School’s Quaker connections. Known as Quaker Walk, it is paved with sixty-eight stones collected from Quaker sites in the United States, England, and the West Indies, and from George School’s first sister schools in Germany. Each year, a group of juniors carrying a daisy chain leads the procession and then lines the path as seniors file in.