“As individuals go out into the world, they represent the possibility of changing it and making it a better place.”

Though he doesn’t like the word “integrate” because he feels that it doesn’t reflect that “individuals retain their own integrity,” John Streetz, along with wife Jackie, does indeed integrate the George School faculty in 1950. He takes a position as a science teacher and dormitory counselor after considerable persuasion by Head of School Dick McFeely. Jackie becomes a secretary in the office of the boys’ dean, Jack Talbot.

John and Jackie are welcomed and supported by some in the community and rebuffed by others. Though the numbers of black students and faculty stay low for some time, he helps the school’s efforts to recruit more, including Julian Bond ’57, acknowledging the challenges that face them: “Like me, when it was time to get a haircut, he wasn’t going to be able to get one in Newtown.” But over time, things change. As John says, “When I was there we began to get students from ABC [A Better Chance]. Students and faculty worked together to foster diversity. Kids, even if they came from the Deep South, bought into the ethics that were promulgated, the concept of equity and inclusion.” 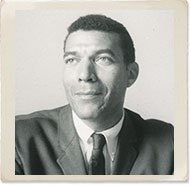 For sixteen years, John teaches biology and chemistry, is a class sponsor and day-boy counselor, coaches track and the new cross-country team, and in his last year serves as acting dean. With a GE fellowship, he gets his master’s from Wesleyan University, and he develops new science curricula. In 1962 he and Jackie take their first international trip when they supervise a three-month work camp at an orphanage in Lahr, Germany.

John continues to teach at George School until 1966, when he accepts a job as assistant headmaster at Oakwood Friends School. Even after he leaves George School, eventually settling in California, John maintains his close ties and love for the school. He serves on its advisory board, centennial campaign committee, and resources committee, which assesses and ensures the school’s educational quality and financial stability.

John and Jackie are beloved by generations of George School students. In 2009 the school names new faculty housing, a duplex, for the Streetzes—one side for John and the other for Jackie. For their 50th reunion in 2011, the Class of 1961 raises considerable funds for an endowed scholarship in the name of their class sponsor and his wife.